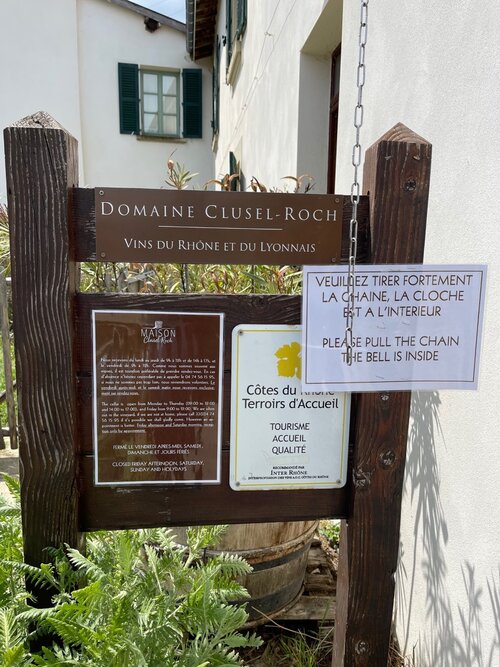 From the 1950s to the 1980s, René and Joséphine Clusel cultivated, like many Ampuis farmers, vegetables, fruit trees, and Côte-Rôtie vines, whose wine they marketed in bottles. At that time, Côte-Rôtie wines did not enjoy their current reputation, but René Clusel’s Côte-Rôtie was appreciated by connoisseurs.

Despite the vineyard’s lack of notoriety, his son Gilbert Clusel is betting on the future of the Côte-Rôtie. As soon as he finished his studies in 1980, he joined the family estate, then began to clear and restore old abandoned vines. Indeed the Côte-Rôtie vineyard, very prosperous from Antiquity to the beginning of the 20th century, had been almost abandoned since the First World War, and many hillsides were covered with broom, shrubs and even oaks growing through the old low walls. When René Clusel retired, the estate had three and a half hectares of vines. It was at this time that fruit and vegetable production was abandoned. It was also at this time that the Grandes-Places vine, planted in 1935 by Baptiste and Marguerite Clusel, René’s parents, saw its production bottled separately and the estate took the name of “Clusel-Roch”, from made of the association of Gilbert Clusel and his wife Brigitte Roch.

The 90s still saw many changes: planting of massal selections from the Grandes Places vines, resumption of plowing, cessation of chemical treatments, construction of a new modern and functional cellar which allows vatting by gravity.

These questions naturally led to the organic farming certification of Côtes-Rôties in the 2000s, as well as to the resumption of grafting on the estate.

Over the years, a new generation has joined the estate: Guillaume Clusel, Gilbert and Brigitte’s son has been working the family vines since 2009. He now assumes most of the responsibilities, supported by his parents and a young team of passionate workers and winegrowers. He introduced the third appellation of Lyonnais, the Coteaux du Lyonnais AOC, by leasing vines in the towns of Millery and Grigny.

which he also cultivates organically. In 2014 he decided to create a wine merchant structure to overcome the bad years and open up to other appellations. He works with winemakers in whom he has complete confidence, certified organic in the Coteaux du Lyonnais, and working in this spirit for the Saint-Joseph.